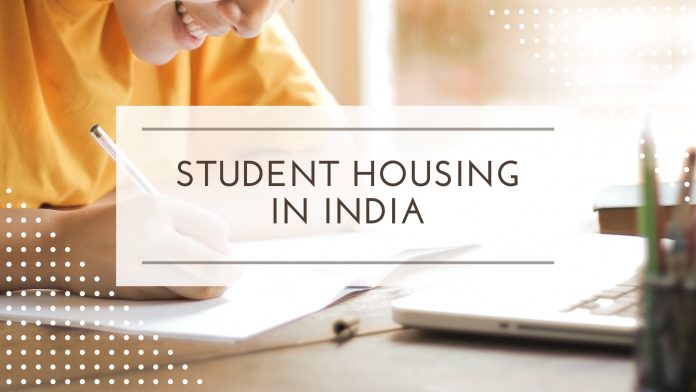 When a student migrates to another city or a state for pursuing higher education, finding a suitable accommodation that lies in proximity to the institute and offers basic amenities is a primary concern. While on-campus and paying guest accommodations are preferred by a large number of college-going students, substandard living conditions in these centers often compels them to look for other student housing options.

Considering the growth the education sector has witnessed over the years, both in terms of the increasing number of students and policy changes, the demand for an adequate supply of superior quality accommodation in India is on a rise. Changing microeconomics, the continuous evolution of the Indian education sector, and the accommodation-centric demand-supply gap has therefore shifted the focus of investors from the traditional to alternative real estate asset classes. One such is the student housing in India.

In comparison to on-campus or PG accommodations, the concept of stand-alone student living or housing is still raw in India. However, the advantages these properties offer in terms of affordability, comfort, in-house facilities, and proximity to educational institutes, has created a separate sub-class in the Indian real estate sector. Plus, the professionally managed student accommodations not only provide a sense of safety and security but also promote social interaction amongst students.

Through this blog, we aim to highlight the growing importance of student housing in India and how it is poised to change the future of rental based accommodations.

Major Factors Pushing the Growth of Student Housing in India

With increasing enrolments, rapid intra- and inter-state student mobility, and the influx of foreign students, the demand for high-quality accommodations have risen. Although higher educational institutes (HEIs) offer on-campus rooms, the demand-supply gap is higher than what the institutes can accommodate. This has forced the students to look at housing options beyond campus premises. Here are the major elements that are driving the growth of student housing in India.

India has the world’s largest 5-24 years age bracket population (about 500 million). Although the student age cohort varies from one state to another, the college-going population is expected to reach 140 million by 2030 (Higher Education in India: Vision 2030, EY). This is also visible in a report published by All India Survey on Higher Education (2018-2019), according to which, 37 million students are currently enrolled in 993 universities and 50 thousand plus colleges and stand-alone institutions in India.

Simply put, the gross enrolment ratio is the number of students enrolled at different education levels. Between 2010-2018, the GER increased from 25.8% to 19.4%, and now, the National Education Policy (NEP) aims to achieve 50% GER by 2035. Although increasing GER is a positive attribute of a developing education sector, the demand-supply gap is still prevalent.

At present, there are over 40 thousand international students hailing from 164 countries who are enrolled in various Indian colleges. In addition to this, the government launched a “Study in India” campaign in 2018 to offer premium education to international students at affordable rates. This is expected to attract close to 2 lakh students in India. However, if we look at the increasing GER and the number of beds available for 37 million higher education enrollees, there are only 6.54 million hostel beds available.

Earlier, the demand for student housing in India was majorly met through paying guest accommodations. While they were, and still are considered as an affordable housing option, this arrangement comes with its own challenges. Some of which are timing restrictions, undercooked food, poor internet connectivity, and lack of personal space.

Nowadays, in order to achieve a comfortable and better living standard, students and their families are willing to spend more on housing. This has altered the student housing trends from PG and university-based to well-equipped apartments.

Student housing in India, in particular, is a largely unorganized and fragmented sector. While there are a plethora of advantages of investing in the industry, the sector still faces a lot of challenges in terms of affordability and safety quotient.

How can Developers & Service Providers Benefit from Student Housing Models?

As discussed, only 20% of student housing demand in India is met by educational institute operated Purpose Built Student Accommodation (PBSA). Since traditional universities are unable to cater to growing demands, the need for student housing that is built by the private sector and new-age startups has accentuated.

Although the private developer operated PBSA is at nascent stages in India, here is how Indian real estate developers can build, manage or operate different types of accommodations and earn good yields-

What’s in Store for Operators?

Whether it is the increasing inter-state mobility or expanding college going student cohort, there is a strong demand for building student living facilities pan India. Uttar Pradesh followed by Maharashtra and Karnataka tops the list of states with the maximum number of colleges. When it comes to the districts with the highest number of academic institutes, Bengaluru followed by Jaipur, Hyderabad and Pune tops the list (CBRE-SAPFI 2019 Report).

Hence, metro cities along with a few Tier II and III cities, which have become premium education hubs, are playing a pivotal role in bolstering student housing in India.

Over the years, Karnataka has emerged as a top IT-ITeS and educational hub. In fact, it is the only Indian state which has recorded the maximum number of international students inflow. The central, south and north-western parts of the city houses a lot of higher educational institutes (HEIs), and consequently has the highest enrollment ratio. Hence, the demand for student housing variants is very high in these regions.

Owing to the availability of multifarious premium institutes that span over almost every field of study including, literature, theatre, science, and law, Pune has emerged as a top education hub. It is also the reason why the city is popularly known as the “Oxford of the East.” When it comes to student housing in India, particularly the Pune localities, here are the regions that are witnessing a huge spike in housing demand:

The national capital territory houses some of the country’s top HEIs such as Delhi University, IIT, and GGSIPU along with dozens of well-renowned private establishments. These institutes are either centrally located or are found along Yamuna Expressway, Sohna Road, and Rohini. In addition to this, there are a plethora of coaching centers in areas like Rajendra Nagar, Karol Bagh, and Mukherjee Nagar that are fuelling the demand for student housing in Delhi-NCR.

*Note: This data has been accumulated from secondary research including, news articles, market research reports, and websites of companies that offer student housing in India.

What Needs to be Done?

The home ownership preferences of millennials are changing. Hence, the built-to-suit properties should come loaded with complimentary facilities like Wi-Fi, fitness centers, air-conditioners, laundry service, and food court. Developers and operators also need to work on brand building. Rather than following a one-size-fits-all approach, laying emphasis on location and safety features will build trust, thereby justifying the premium one is charging.

As for the government, it’s extremely important to institute guidelines and formulate a policy framework. This will help in codifying best practices for developers while ensuring a comfortable space for students. For example, tax rebates can be considered for industry players. On the contrary, food services provided by the service providers should undergo a stringent quality check.

Additionally, for the concept of student housing in India to scale at full potential, the government should integrate PPP models with their Youth Hostel Scheme and Study in India Campaign. This will not only offer better resources for the government but will also boost investments from private sector players.

Another investment route that is gaining popularity across the globe is the student housing real estate investment trusts (REITs). These trusts own, manage, finance or operate income-generating assets. In India, the concept of REIT was introduced in 2008 and it gained momentum only in 2019, when The Embassy Office Parks raised IPO. Hence, the student housing REIT is also a plausible way to gain exposure in this sector.

Student Housing in India is the Next Big Thing

Owing to increasing enrollments in HEIs, dearth of well-maintained and affordable spaces, and various government initiatives, purpose built student accommodations have gained impetus over the years. While student housing acts a value addition to the services HEIs provide, PBSAs provide a new platform for developers to diversify from the traditional real estate assets.

Delhi-NCR and Bengaluru were the first activity centres for the student co-living segment. However, the demand for such accommodations has now expanded to other Tier-1 and Tier-2 & 3 cities. New student housing opportunities are emerging in cities like Kota, Indore, Coimbatore and Ahmedabad. This can be attributed to low costs of lands and the need to bridge the demand-supply gap.

Although student housing in India is growing at a rapid pace, operators and developers should focus on brand building and equipping the properties with basic amenities. On the other hand, they should also consider various factors before foraying in this asset class. These include, but are not limited to, funding requirements, rental housing policies, operator or developer profile, and fiscal and non-fiscal incentives.

The student housing segment in India might be at nascent stages, but it has tremendous potential for scalability. The government and industry players have to work in tandem in order to take the student living sector to soaring heights.

Women in Real Estate Sector Who Made it Big

Whats on your mind? Let's talk.